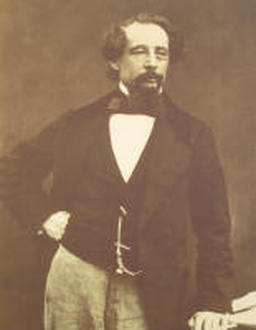 Charles Dickens was born February 7, 1812, the second child of John and Elizabeth Dickens. (His beloved older sister, Fanny, would be immortalized in A Christmas Carol as Scrooge’s sister, Little Fan). John Dickens was a civil servant, who worked as a clerk in the Navy Pay Office at the time of Charles’ birth.

In 1817, John Dickens was assigned to the huge Navy shipyards in Chatham, Kent.  During the family’s five years in Chatham, Charles started school, beginning his lifelong love affair with books.  It was at this time that he also discovered the theatre, which he regularly attended with his uncle.  Later he described this as the happiest period in his childhood, and moved back to the vicinity of Chatham as an adult.

By 1822, however, there were six Dickens children, and the family’s finances, always stretched thin by John Dickens’ inability to live within their means, took a further blow when he was transferred back to London. The family relocated to a four-room house in the seedy neighborhood of Camden Town. By 1824, their situation was so precarious that 12-year-old Charles was pulled out of school and sent to work full-time in a factory.  Eleven days after Charles began work at the factory, John Dickens was imprisoned for non-payment of debts, and the rest of the family was placed with him in the Marshalsea Debtors’ Prison. Charles was left to fend for himself on his six shillings a week (barely enough for him to eat, let alone to help support his family).

For five long months, Charles Dickens worked long, tedious days in the rat-infested warehouse. This traumatic experience left deep emotional scars, and Dickens was so ashamed of his family’s situation that he talked about his experiences at the factory to only two people during his life. Nevertheless, it would have a profound impact on his writing as well as his subsequent fierce devotion to social welfare, especially when it involved children and education. In particular, his time in the factory ingrained in him a sense of loneliness and isolation with which he struggled throughout his life. As his fictional alter ego David Copperfield put it, “I had no advice, no counsel, no encouragement, no consolation, no assistance, no support, of any kind, from anyone...”

By June of 1824, John Dickens was released from prison and Charles was able to return to school for a few more years. As a teenager, he again found work to support himself, first as a clerk in a law office, then as a newspaper reporter. He was eventually assigned to cover sessions of Parliament, and taught himself shorthand in order to take accurate transcripts of the speeches and debates. These skills won him a reputation as London’s fastest political reporter.

During this time, Dickens began writing short stories for magazines, and then novels in the new serial form. Books were still fairly expensive items in Dickens' time, but the introduction of serialization made literary works far more available to a wide middle and lower-middle class audience. Essentially, serial novels were purchased on an installment plan, one chapter at a time. Charles Dickens became a master of this form, skillfully building suspense and inserting tantalizing details in each chapter.

In 1836, shortly after publishing his first novel, The Pickwick Papers, Dickens married Catherine Hogarth, the daughter of a newspaper editor. They would go on to have ten children together, and eventually to separate in 1858.

Between 1836 and 1865, Dickens worked extensively.  He published several novels which met with extraordinary popular success, while also publishing and editing two magazines. His speaking engagements in the United States, Canada, Italy and Switzerland were extremely popular, and he managed to purchase a large house in Gad’s Hill, near his childhood home in Chatham. Nevertheless, maintaining this upper middle-class lifestyle with such a large family proved to be a continual challenge, and Dickens frequently worked to the point of exhaustion.

Charles Dickens was the first real “celebrity author,” and he used this status to vehemently criticize all kinds of social injustice in Victorian England; from the slum conditions in which many people lived to the maltreatment of child laborers, prisoners, and others. He is still one of the most popular and widely read English authors, and not one of his books has ever gone out of print.

In 1865, Dickens was involved in a terrible train derailment that killed 10 people and seriously injured 49 others.  Dickens (whose train car had tipped but not overturned) went to the aid of the injured passengers until rescuers arrived, then clambered back into his own carriage to retrieve his half-finished manuscript for Our Mutual Friend. While he had seemed relatively unscathed at the time, his health was never good following the accident, and in June of 1870 he suffered a stroke and died at home. He was laid to rest in the Poets’ Corner of Westminster Abbey,  in a tomb that reads: “He was a sympathizer to the poor, the suffering, and the oppressed; and by his death, one of England’s greatest writers is lost to the world.”