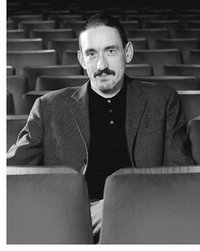 Born in 1958, Neil Bartlett grew up in Chichester. West Sussex.  England, which he has described as a “boring town in the south of England.” For this prolific writer and dramatic artist-to-be, a very good secondhand bookstore turned out to be the town’s saving grace.  He developed an abiding interest in literature and theatre.

Bartlett completed his undergraduate studies at Oxford University, where he became interested in a dramatic style called hypertheatricality that has permeated much of his work. In essence, hypertheatricality eschews realism and acknowledges its make-believe nature in strong and sometimes outrageous ways. Rather than using technical effects that create the illusion of reality, Bartlett’s hypertheatricality tended to be more minimalist in its design aspects and to rely more on the actors and the imagination of the audience members.

Shortly after graduating from university, Bartlett and a group of friends founded his first theatre company, the 1982 Theatre Company. He performed in or directed a number of performances in unusual venues, such as street corners, staircases, or hospitals. He also worked as the administrator for a gay community theatre, as a street clown, and a supporting act for the famous Goth band Bauhaus. During the 1980s Bartlett also wrote his first book, Who Was That Man?, about the life of Oscar Wilde, and went on to write critically acclaimed novels about gay life in England.
During the mid to late 1980s, he was a key director for England’s renowned Theatre de Complicité (now known simply as Complicité), and his production of More Bigger Snacks Now helped define the company’s reputation for groud-breaking work as well as his own reputation as an up-and-coming director. Complicité’s experimental, movement-based approach has had a profound influence on Bartlett’s subsequent work as a director.

In 1988, Bartlett formed another theatre company called Gloria, which created and toured close to twenty shows in a ten-year period. Gloria presented works at major theatres across England and the United States, including the Royal National Theatre and the Goodman Theatre in Chicago. Gloria’s signature musically-imbued theatre productions were adaptations of classics as well as new works with the high level of theatricality for which Bartlett had become known. He wrote or adapted thirteen plays and performed in six of the productions. In this period Bartlett was also highly productive as an activist, working with London’s first International AIDS Day and many other rallies, benefits and sociopolitical causes.

In what was considered a controversial move, Bartlett was appointed the artistic director for London’s run-down and failing Lyric Hammersmith Theatre in 1994. He drastically altered the pricing policy to attract new audiences, included young people and minorities, and his season selections were considered  challenging and quite unusual.  During Bartlett’s decade-long tenure, however, the Lyric Hammersmith became one of London’s most cutting-edge and critically-acclaimed theatres.  It specialized in outrageous musicals, unique Christmas shows, experimental theatre, and work that consistently challenged both the audience and performers. Bartlett was also instrumental in adding strong educational components to the Lyric’s programming.

In 2000, Bartlett received an O.B.E. (Officer of the British Empire) Award for his remarkable work in restoring the Lyric Hammersmith to thriving artistic success. He left in 2004 to return to a life as a freelance director and writer, and now lives in Brighton with his partner James Gardiner.

Bartlett has developed a reputation as a wildly intelligent writer, translator, and adaptor as well as a talented performer, director, and teacher, and has been described as a “protean polymath of a creator.” His work is almost always perceived as “edgy” and often more than slightly controversial. Bartlett frequently takes on older plays or stories and brings them to the present age, giving a fresh approach and perspective to their themes.  He has notably adapted three of Dickens novels for the stage, A Christmas Carol, Oliver Twist and more recently, Great Expectations.